The Pechanga people have always regarded food resources with the greatest respect. Culture and traditions are born out of practices developed in response to the foods given to the Luiseño Indians by the Creator. This led to highly developed and regulated hunting and gathering techniques designed to benefit the tribe and the resource itself. It is this balance that Pechanga Cultural Resources hopes to someday emulate so that future generations will be able to view these practices in real terms.

While some plants are eaten fresh, many need to be processed to make them edible. The type of processing and storage depends on the type of food being used. We continue to eat native plant foods today, although we prepare them using both traditional and modern cooking methods.

Some foods are eaten raw, including greens, seeds, berries, fruit, and roots.

Many plants are dried so that they could be stored longer.  Fruits and roots are often dried in the sun, sometimes after being sliced or pounded thin.

Seeds and nuts that are stored for long periods are usually parched first.  Parching is a process where foods are dried quickly by heating them.  Our people still parch seeds and other foods:  the traditional method was to toss them repeatedly in a shallow basket with hot pebbles, but modern cooks usually parch seeds in a frying pan.  This pulls the moisture out of the food and keeps it from spoiling, sort of like freeze-dried foods today.  Oily foods like pine nuts are toasted longer to add flavor and to keep them from going rancid.

Our ancestors ate soup or mush daily. The foods people ate every day varied by season. Most foods were ground in a metate or mortar before being boiled.  Acorn flour was usually the base for soups and mushes, but flours made from grass seeds and other nuts were also used. Mush made from acorn flour is called wíiwish. Fruits, vegetables, seeds, meats, and fish were all part of our daily diet.

Because they did not have metal pots, our ancestors used watertight coiled baskets to boil foods. First, a basket is filled with water and the food that is going to be cooked.  Next, cooking stones are heated on the fire, and then the person cooking places a hot stone into the filled basket.  As the stone cools, the cook replaces it with another from the fire.  This technique gets the water so hot it boils. The water keeps the hot stones from lighting the baskets on fire, but sometimes, old cooking baskets have scorch marks on the bottom from the cooking stones. Cooking in baskets is still practiced on occasion although most people prefer to cook on stoves.

Food is also fried using stones griddles.  Large, flat stones are heated in the fire and used as a griddle to make small cakes or fry meat.  Sometimes these stones were modified to make them easier to use.

Our ancestors used every part of the animals they hunted.  This practice was established at the time of the creation: the Káamalam who agreed to become food for others were promised that no part of their bodies would be wasted. Parts that we could not eat became tools, clothing, and other goods.  Most modern atáaxum hunters still follow this practice.

Like plant foods, there are many ways to prepare animal foods, and we still use both traditional and modern methods.

Meat is preserved for later use by being cut into strips, salted, and pounded thin. After being completely dried in the sun for several days, it stays edible for several months.

Meat is usually roasted over an open fire.  Depending on the kind of meat, it is cooked on a spit or placed directly on the coals.  Our ancestors roasted tiny creatures like insects and insect larvae by tossing them in a basket with hot pebbles or coals from the fire.  Meat is also fried on griddles made of flat stones that are heated in the cooking fire.  Bone marrow contains many essential nutrients, so we cook them bones and crack them open to extract the marrow.

Fresh and dried meat are used to make stews and soups.  Sometimes bones are ground into a paste and mixed with food for flavor and additional nutrition.

Our ancestors stored food in baskets or clay pots. Just like today, foods were stored to keep them clean, edible, and out of the reach of pests. Proper storage was essential to ensure that we had plenty to eat during every part of the year. 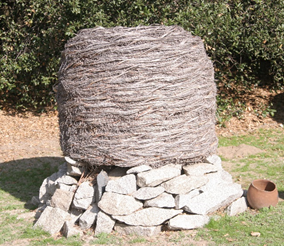 Baskets of various sizes can be used to store everything from food to firewood. One specialized basket is the willow granary. This enormous basket is sometimes more than 6’ tall and 4’ in diameter, and it can hold an entire season’s acorn harvest.  It is woven from fresh willow branches, which are a natural insect repellant. The finished granary is placed on a raised platform made of wood or stone that helps to keep animals out of the acorns and promotes air circulation to keep the contents dry.  A cover of willow branches is often put on top. Acorns stored in a willow granary will stay edible for two to three years.

Pottery jars and bowls may be used to store seeds and water. They were sometimes hung inside kíicha (houses) to keep them dry and clean. Storing water in pottery has the added benefit of keeping the water cool. We never use clay pots for cooking since they can shatter when heated. Dried foods were often tied in bunches and hung from the ceiling, too, especially dried meat and fish. Like the other storage methods, this kept the foods protected from the elements and pests, but allowed us to access them easily.