A people of tradition, we do not let the sun rise or set without remembering who we are — the Pechanga People.

The Pechanga Band, also called the Luiseño (Spanish Missionaries), and for a time Mission (California English) Indians, has been a sovereign government since before the United States came into existence. The Pechanga Band derives its authority to govern from the General Membership. Original aboriginal lands expanded far out from the traditional Luiseño center of Temecula, California. Today, the 5,500-acre Pechanga Reservation is located near Temecula being east of Interstate 15 and Highway 79 South. The Pechanga Band of Luiseño Indians, along with over 560 other tribal governments throughout the United States including over 100 tribes in California, is a federally recognized political jurisdiction with governmental authority over its reservation land and people, similar in scope and authority to states. 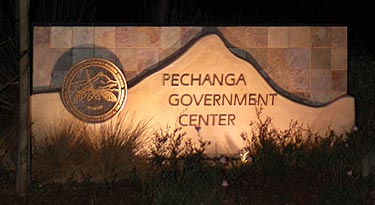 The United States has a mix of governments: federal, state and American Indian tribes or Alaska Native entities. The State of California, for instance, is sovereign to the extent that its powers are defined and limited by the Constitution of the United States as interpreted by the U.S. Congress and, ultimately, the U.S. Supreme Court. The same holds for the sovereignty of tribal governments.

As with a state government, any power not expressly vested with the federal government resides with the Pechanga Government. The states do not in themselves determine the scope of any government-to-government relationship with Indian tribes, nor do federally recognized tribes come under any control by a state government and its political subdivisions (cities, counties and special districts) unless expressly authorized by the United States Congress.

As citizens of the United States, as well as the Pechanga Band, the Pechanga people honor the laws and obligations of all Americans.

Historically, state governments — including California — have been hostile to the concept of recognizing and dealing with tribes as governments of equal stature. Under the Constitution of the United States and through numerous treaties and court decisions, the federal government undertook the task to protect tribes from the states, who have often coveted Native American lands and assets and sought to impose their will on Indian tribes and people.

The U.S. Supreme Court has repeatedly recognized tribal sovereignty in court decisions for over 170 years. In 1831, the Supreme Court decided, in Cherokee Nation v. Georgia, that Indian nations had the full legal right to manage their own affairs, govern themselves internally and engage in legal and political relationships with the federal government and its subdivisions. In California v. Cabazon (1987), the Supreme Court upheld the right of tribes, as sovereign nations, to conduct gaming on Indian lands, free of state control when similar gaming outside the reservation is permitted by the state for any purpose.

The sovereignty was further recognized — while at the same time infringed upon — by the Indian Gaming Regulatory Act passed by Congress in 1988. The act affirms that tribes have the power to conduct gaming on Indian lands, but it gives the states the ability to negotiate gaming regulation and games played through the signing of tribal-state compacts for Class III (casino-type) games.

Today, the Pechanga Band of Luiseño Indians is a fully functioning, modern government. The Pechanga people govern by a constitution and bylaws, and the tribal government is two-tiered. Elected by a majority of the General Membership, the Pechanga Tribal Council is responsible for setting policy and administering a wide range of governmental programs within the boundaries of the reservation. The seven-member Pechanga Tribal Council is elected every two years. The General Membership also elects the tribal secretary, tribal treasurer and members and officers of the Pechanga Development Corporation and Pechanga Gaming Commission.

Some Indian nations were recognized in the 18th and 19th centuries. A few, decimated by war, or having made treaties with English colonists prior to the existence of the United States, were overlooked by the U.S. in granting formal "federal recognition" as they clung tenaciously to remote corners of their aboriginal homelands, culture, traditions and inherent sovereignty.

Recognition can happen in only two ways: an Act of Congress recognizes the tribe, or any unrecognized tribe undertakes the lengthy and complex Federal Recognition Process through the Department of the Interior. As a result of an Act of Congress, the Pechanga Band is recognized as a sovereign government having a government-to-government relationship with the U.S. government. Accordingly, the Pechanga Band is afforded U.S. Constitutional protections.

Each Tribe Determines Its Membership

Pechanga is committed to bettering the lives of its people and the surrounding communities.

Learn more about our charitable contributions

We look forward to great growth and diversification of our tribal economy.
Learn more