UNRATIFIED: A Symposium on the Eighteen Treaties between California Indians and the United States, 1851-1852 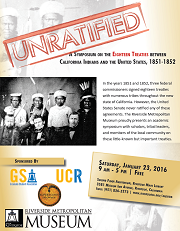 The longtime chairman of the Pechanga Band of Luiseno Indians’ Tribal Council, Mark Macarro, was re-elected to his 10th consecutive two-year term, the tribe announced Tuesday. Macarro, 50, was chairman during the recent Liberty Quarry battle, which ended when the tribe purchased a wide swath of acreage on the Riverside/San Diego County border that Granite Construction had eyed for a controversial quarry project.
That land is sacred to the Pechanga and it includes a mountain, Pu’eska, that’s integral to their creation story. The tribe has vowed to preserve the land for future generations.
In other election results, Andrew Masiel, Sr.; Robert “R.J.” Munoa; Russell “Butch” Murphy; Catalina R. Chacon and Corrina Garbani-Sanchez all retained their seats on the seven-member council.
The seventh seat was secured by a former councilmember, Marc Luker.
The council term begins August 17.
Read Press Release
July 22, 2014 by Aaron Claverie
http://blog.pe.com/politics/2014/07/22/pechanga-tribal-chairman-macarro-re-elected-for-10th-time/

Riverside County panel rejects proposed rock quarry
The city of Temecula and the Pechanga Band of Luiseno Indians strongly opposed the 414-acre project on a mountain overlooking Interstate 15. The site is sacred to the tribe.

The Riverside County Planning Commission on Wednesday rejected an application for a massive rock quarry proposed near Temecula that was strongly opposed by the city and the Pechanga Band of Luiseno Indians.

Granite Construction of Watsonville wants to develop a 414-acre rock quarry operation on a mountain that looms over Interstate 15, a peak the Pechanga say is within one of the most sacred sites for all Luiseno people.

The commission voted 4 to 1 against the proposal, citing concerns about the effect on the environment and health of residents in the Temecula area and because of the tribal leadership's objections.

The decision drew cheers and applause from audience members opposed to Liberty Quarry. Quarry opponents, most clad in orange to signify their opposition against the mine, broke out in smiles and hugs afterward following the hearing at the County Administrative Center in Riverside.

"Was I shocked? No," said Kathleen Hamilton, a member of the anti-quarry group Save Our Southwest Hills, and one of many who boarded a chartered bus or drove 35 miles to attend the hearing. "We have one of the finest Planning Commissions in America."

Temecula City Councilman Mike Naggar, a quarry opponent, said the combined efforts of the city, the public and the Pechanga Band of Luiseño Indians, "along with the facts, I think ruled the day."

Gary Johnson, aggregate resource development manager for the quarry developer, said his company was "very disappointed" with the vote and planned to appeal to the county Board of Supervisors.

"We feel the (quarry's environmental impact report) more than adequately addressed all the concerns heard," he said, adding that Granite "look(s) forward to a fair hearing" from supervisors.

The five-member commission voted 4-1 to deny a surface mining permit and a noise ordinance exemption for the quarry. Commissioners also recommended supervisors not approve a requested zoning change for the project. They did not decide whether to certify an 8,500-page environmental study of the open-pit mine sought for a 414-acre site between Temecula and the San Diego County line.

The climactic vote comes after six meetings and dozens of hours of testimony that was equal parts passion and analysis. Emotional pleas from everyday residents gave way in later hearings to dry testimony from experts hired by Granite and quarry opponents.

Commissioner Jim Porras said the public's intense feelings about the quarry made it impossible to make a cut-and-dried decision based only on the "merits of the project."

"I can't ignore (the public's passion), and it does sway me," said Porras, the only commissioner to oppose the denial.

He continued: "I find myself having dreams and nightmares about this thing. ... This has been very tough."
Commission Chairman John Roth said he believed the quarry's potential negative effects outweighed its positives. He feared the quarry could lead to air pollution, increased noise and truck traffic. He said the quarry would ruin a key sacred site for the Pechanga Band of Luiseño Indians.

By — This email address is being protected from spambots. You need JavaScript enabled to view it., PE News

The tribal chairman of the Pechanga Band of Luiseño Indians pleaded with Riverside County Planning commissioners tonight to block the proposed Liberty Quarry, which he said would destroy one of the tribes most sacred sites.

Mark Macarro said the quarry, which would be just east of Pechanga's land, would hollow out a mountain that was central to his tribe' creation story. The mountain is analogous to Christians' Church of the Holy Sepulchre or the Dome of the Rock for Muslims, he said.

"And this mine would literally destroy it, change it forever," Macarro said.

Macarro's speech drew rousing applause from the audience of more than 1,000 - most of whom appear to oppose the project.