Today, all Pechanga people live in modern houses or apartments, but before the arrival of the Spanish, their ancestors, the Payómkawichum (Luiseño people) lived in kíicha (houses).  Kíicha were mainly used for sleeping and as shelter from bad weather.  All other daily activities (cooking, weaving, tool-making, etc.) were done outside.

While all kíicha are slightly different due to three different materials they can be made from, they are usually dome- or cone-shaped, and were lined with furs or skins to keep wind and water out.  The owners covered the floors with mats made of juncus or tule reeds. A kíicha’s door was made of an animal hide or a reed mat.  After the arrival of Europeans, some ‘ataaxum (Native people) made “ramada-style” kíicha, which look a lot like European cottages, but they were made of native materials (usually willow).  Kíicha were repaired as needed, and a well-maintained kíicha could last for many years. When they got too old or too damaged to fix, their owners would burn them and build a new house.  A new kíicha usually took a few days to build. 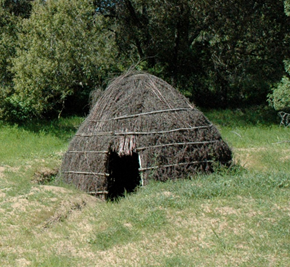 Willow houses are made of willow branches and twigs (with leaves still attached) stuffed between a double-layered willow frame.  Willow trees usually grow near waterways. Because willows were so abundant in the Temecula Valley, they were the most commonly used building material in this area.  Willow houses were semi-subterranean.  The house builders would dig a round, shallow hole about one or two feet deep where they planned to put the house.  This served two purposes: it leveled the floor inside the home and helped regulate the temperature inside.  Willow houses were found throughout the valley, but were most often built on slight slopes to keep rainwater from collecting inside them. 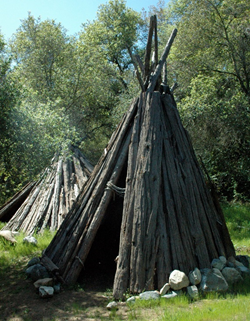 Cedar bark houses are made of large slabs of cedar bark layered over a frame of vertical poles. Like willow houses, cedar bark houses were constructed over a shallow pit. They were built in the mountains using bark pulled from dead cedar trees. The water-resistant bark is layered three or four slabs deep, and it provides excellent protection from rain, snow, and wind. 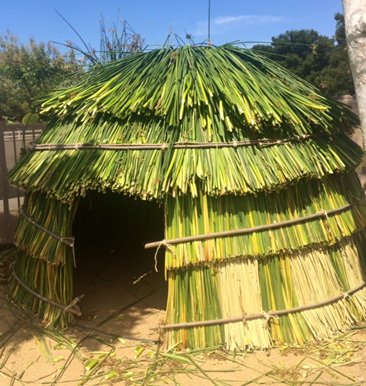 Tule houses are made of fresh tule reeds folded and tied over willow frames.  Tule, which grows in and near water, makes good houses for the spring and summer.  It is water-repellent and keeps the inside of the kíicha cool on hot days.
Tule houses were usually built near lakes and rivers.