The Pechanga Development Corporation views gaming as a means to create jobs and to achieve long-term economic diversification and independence for the tribe. 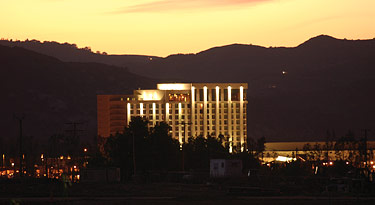 Helping to Provide for Tribal Needs

The Pechanga Resort and Casino has been the main source of tribal government funding for long-needed and previously unaffordable infrastructure on the reservation. As a result, the tribe is upgrading substandard roads, housing, and our domestic water system, installing lines to connect with the regional wastewater treatment system to which we pay our way. The tribe also provides for public safety at our businesses on the reservation. We are improving emergency services, including the construction of our own fire station, procuring modern firefighting vehicles and equipment, establishing fully trained and certified fire personnel, as well as licensed emergency medical technicians who serve the Resort and Casino. We have developed an extensive Community Park, a Youth Center, a Senior Center and a new 70,000 square-foot Tribal Government Center.

Impact Beyond the Reservation

The positive economic impacts of the Pechanga Resort & Casino benefit the community around us. For example, in 2000, we participated in dedicating the new Pala Road Bridge, a project completed under a partnership with the city of Temecula, with the Tribe raising $6 million and the city, $4 million. We helped pay for improvements to the Pechanga Parkway and to construct a sound wall along the residential section of the Rainbow Canyon development. Please see our Economic Impact and Charitable Contributions sections for more information.

A Reputation for Business Leadership

Since its opening, the success of the new Pechanga Resort & Casino has earned the Pechanga Band a reputation for business leadership locally and nationally in the tribal government gaming industry, continuing a tradition that began with the Pechanga Resort Center. The PRC has set a new standard in Indian gaming facilities in California and across the country. In 2002, it was awarded a coveted Four Diamond designation by the American Automobile Association Tour Book. It features first-class restaurants and routinely hosts Broadway-caliber theater shows and musicals.

The Pechanga Development Corporation views gaming as a means to create jobs and to achieve long-term economic diversification and independence for the tribe. We look to a future where we can invest in off-reservation enterprises, thereby continue to strengthen the economy of our region, and further enter into the commercial mainstream of California.